Different types of clutches rely on varying mechanisms to stop the force generated by a motor. Mechanical overrunning clutches can control the transmission of torque in one drive direction while simultaneously allowing the output axis to continue turning in the original direction. This dual functionality is useful in a variety of different applications. 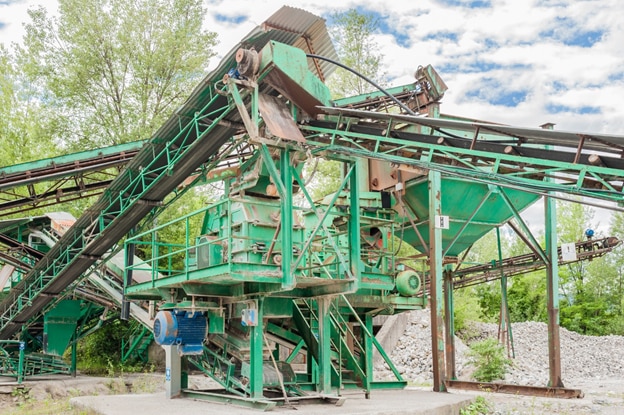 Backstop clutches prevent shafts from rotating in the wrong direction due to a stop, slowdown, or equipment failure. Some of the components used in these clutches include cam action, ratchets, roller ramps, and wrap-springs.

Ultimately, mechanical overrunning clutches may be used to prevent drive shafts from rotating backward and causing significant damage to equipment or machinery on an array of industrial sites. At Tsubaki, we provide backstop clutches for use in a variety of challenging industrial applications, such as:

Cement plants have many disparate transfer systems to move raw materials to processing points and move batches through subsequent stages of production. Backstops control the movement for bucket elevator systems, which carry heavy loads of raw materials and finished products. These systems can effectively transport large loads of limestone and clay on active sites but can be quickly damaged by improper shaft rotation.

Backstops prevent shaft roll back for inclined conveyors and bucket elevators. These systems are usually designed to only allow one direction of movement at the shaft level. These backstops are often found in systems moving contents to silos and crushing equipment. Mining facilities have extensive systems handling the transport of raw materials and the processing of raw materials into more refined forms for offsite use and transportation. These industrial operations rely on backstops to manage the movement of driven inclined conveyor systems and bucket elevators that continually move loads of raw material and finished product.

Coal-burning stations need reliable operations that ensure loads of coal get properly transported to boiler rooms without fail. Backstops prevent shaft rollback of the inclined conveyors, so the movement of coal remains uninterrupted and predictable with no disruptions to electrical supply.

Tsubaki designs and manufactures high-quality mechanical backstops & clutches that are easy to install and maintain. Our BS-F series of external backstops may be used in all major external, low-speed backstop applications only requiring a simple, drop-in installation process. They feature a special labyrinth seal that guarantees long-lasting and efficient performance even in extreme industrial environments, and require minimal maintenance throughout the life of the product. Tsubaki’s BS-F backstops are able to ensure driveshafts turn in one direction and never roll back.

Our BS-F series has all the hallmark design features of our signature products. This starts with Tsubaki’s proprietary Non-Rollover Cam, which prevents shaft roll back even under excessive loads outside of the system’s design parameters. With a simple, three-step installation process, it is quick and easy to install and operate a BS-F backstop. The BS-F backstop’s grease lubrication requires fewer maintenance stoppages than oil, while ensuring the clutch operates at a lower, more desirable temperature. Grease lubricated backstops are also much less prone to seal leaks than oil lubricated backstops.